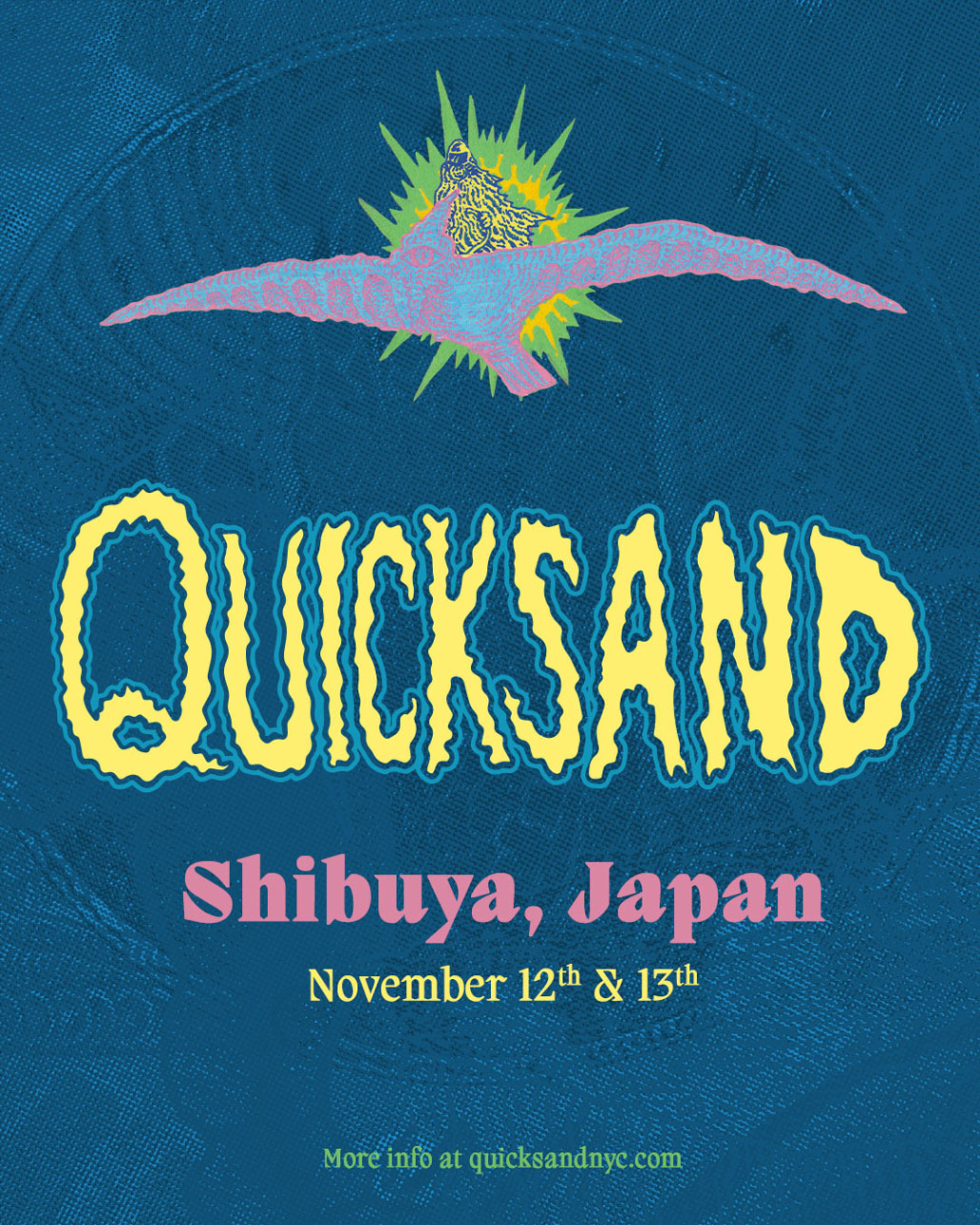 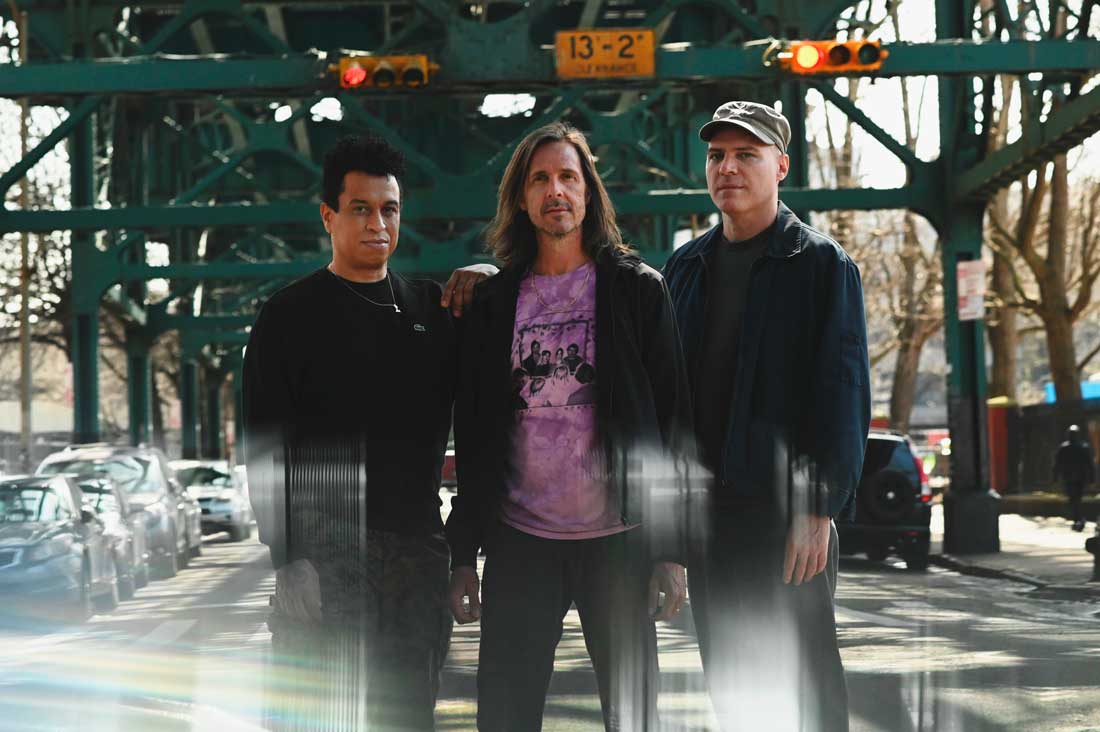 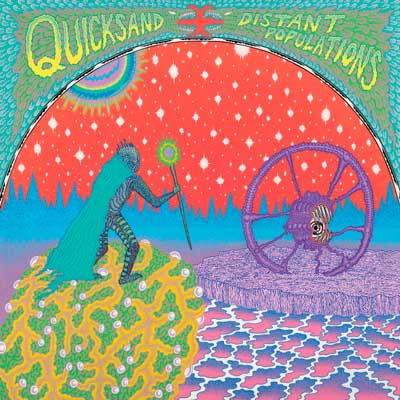 One of the most remarkable aspects of Distant Populations—Quicksand’s first album since 2017’s Interiors—is how timely and prescient the themes running throughout its songs sound at this very moment. Thoughtful, driving, and powerful, like the long-lived band itself, the 11 tracks comprising Distant Populations have an emotional resonance that is only amplified by the events of the past stressed-out, locked-down year.

If there is a recurring theme running throughout the new album, it might be this: “Everyone is on the one hand so connected with each other,” says Schreifels, “and on the other hand is so far apart, and so freaked out about everything.”

That seeming contradiction may lie at the heart of what Distant Populations is all about. The title comes from a lyric from anarcho-crust punk band Nausea’s “Fallout (Of Our Being)” about “destitute populations”; because of the singer’s thick accent, Schreifels misheard it as “distant populations” and instantly connected with that concept. “So we’re checking out each other’s social media and we know what everybody’s doing,” he says, pointing out a sad irony. “But when we’re sitting in the same room together, we’re looking at our phones.”

That peculiar duality—our simultaneous existence in individual relationships and as part of mass society—is examined with power and surprising emotional impact throughout all of the tracks here. Cutting and sharp lyrical passages pop out on tracks such as the throbbing “Colossus”: “A new life/ We’re never meant to feel completed/As long as we’re here/It doesn’t matter what for” And alienation—from whom or what often going unsaid—and loneliness are touched on regularly, whether subtly (“Sometimes it’s better just to keep on traveling” from “Phase 90”) or stated plainly (“Living just around the corner/Share the same existence/Doesn’t make a difference/Deconstructed, isolated” from the closing track “Rodan”). Combine those sentiments with the most sweeping, powerful music the band has ever created, and you’ve got a truly unforgettable, extremely timely listening experience.

Distant Populations, just the fourth full-length album of Quicksand’s career, comes as a comparatively swift follow-up to Interiors–which itself came a full 22 years after its predecessor, 1995’s Manic Compression. Critically lauded and deemed very much worth the wait, Interiors succeeded in reestablishing the band as the powerful and contemporary entity they had always been. “Our only conscious challenge for that period, really,” says bassist Sergio Vega, “was that we felt like we needed to make a record that was worth waiting that long for.” Its success proved that they met that challenge, and, he adds, “galvanized by that, we felt like we know what we are today. We know what fits in our template. And we can build off that and expand on that.”

And expand they did. Distant Populations has a punchier, more up-tempo sound than its predecessor; its 11 songs are concise, carved sonic jewels boasting not a single wasted note; and its raw power, its gripping lyricism, leaps out from the very first listening. It is a striking step up for the band.

The songwriting itself had been no minor process: Following the release of Interiors, the band successfully toured around the world, hitting the US, Europe, Japan, and South America, and in the process fully re-established their chemistry together. Looking forward to making the next album, the three of them—Schreifels, Vega, and drummer Alan Cage—had methodically recorded various soundchecks, improvisations, and show rehearsals, and compiled the results. “Eventually, when it came time to make a record,” Schreifels says, “we would just edit down to the ones that were most exciting to us all, and then refocus on them and see if we could recapture the magic from it.”

Greatly aiding in the process was producer Will Yip, whose masterful work on Interiors had been much appreciated by the band.

“Will has a very organized, systematic mindset,” says Schreifels, “but with that, the perfect complement of that is that he is very open-minded and giving. He’s like super down for whatever you want to pursue, and not begrudgingly. And he’s also a great musician. So everyone within our little organization respects his opinion musically, and especially with the three of us, having that extra opinion that we all respect is really helpful.”

Distant populations going nowhere
So far away from us, you wouldn’t know where
Opposite of you, opposite of me
Generations leveled and taken by the sea
–from “Inversion”

The artfulness at work on Distant Populations is evident from its pounding opening track, “Inversion,” which may encapsulate all that is distinctive about Quicksand’s current music. The lyrics work on a variety of levels, for which Vega credits the “meticulousness” of Schreifels’ lyric writing. “They’re so open to interpretation, and they kind of hit you on a lot of levels,” he says. “I like those kind of lyrics best.”

“That was one of the last songs we came up with,” says Schreifels. “And it was just very primal sounding and very basic, you know, just like two parts. Especially in contrast to Interiors or even our earlier work, you know, where we would tend toward the more complex, I think. I thought it was really cool that we were in a place where we could step back from that, and didn’t have to bells-and-whistles it all out. We kind of did something pretty basic. And I think the lyrics set the tone nicely for the record.”

Another personal favorite of Schreifels’ here is “Missile Command,” a song that, significantly, emerged from a rehearsal jam, he recalls. “It really kind of focuses on Sergio’s whole motif in a very simple way. He and Alan just have this really kind of trademark groove, and I think that really sings on that one to me. I just felt like it’s a kind of song that is very us, but we hadn’t written it yet. So I’m really proud of that one.”

There are a total of 11 tracks on Distant Populations, and not one hits the four-minute mark. But you wouldn’t know it. The album is deep, brimming with substance, and thematically about as contemporary as it gets.

“Sonically, I think this album has a real urgency,” says Vega. “Something in the way that it was mixed. Partly it’s the mix that increased the urgency. But when I look at the song tracking, a lot of songs are under three minutes, right? And that creates a real sense of urgency as well.”

Appropriately, the urgency Vega speaks of reaches its crescendo in Distant Populations’ final track, “Rodan.” A throbbing, monolithic piece much in keeping with the album’s overall emotional landscape—and it is a gripping album closer—the track takes its name from the flying monster of late ’50s Japanese horror film fame.

“If you watch the news right now, it’s essentially a whole bunch of things that are going to scare the crap out of you,” says Schreifels. “And that’s the point of it. You know what I mean? Until they think of the new thing that’s going to scare the crap out of you. If Rodan beats his wings, you know, houses fall down and people die and get all crushed–but Rodan might have just saved you from some other shittier monster that’s really trying to do you harm.

“So it’s trying to capture that feeling that I was feeling–not only in the macro of our modern time, that we live in right now, but also how it plays itself in your own lived experience, and how you’re affected by it in different ways, you know? And those were the feelings and concepts that were driving me–without wanting to be polemic about it, or getting into the nitty-gritty of, well, ‘Fuck Donald Trump.’ You know what I mean? These kind of issues. There’s a lot of people’s lives are being driven by these fears and, you know, I’m no exception.”

There may be a final irony in the title of Distant Populations. Practically speaking, that’s precisely whom Quicksand recorded it for: Listeners very far away. Not a single one of these songs has ever been played live onstage. The band has dates on hold for the fall, notes Schreifels, and fingers are crossed Quicksand will be out there performing very soon. They will likely be the most memorable shows of the band’s career.

“Meanwhile,” he adds, “we’re happy at this stage of the game. We’re excited for this record. And we want people to know.”